The IISL Board during its spring meetings of 2016 had approved following award recommendations by the IISL Awards committee as contained in its 10th report to the Board. The awards were given away during the IISL Dinner on 29 September 2016.

(a) Dr Milton “Skip” Smith and Prof. Joanne Irene Gabrynowicz are being given 2016 IISL Lifetime Achievement Award. Dr Smith’s award is In recognition of his many decades of outstanding services to International Space Law community and to IISL as its Director, and exemplary initiatives for the Manfred Lachs Space Law Moot Court Competition over the past twenty five years. Prof Joanne’s award is in recognition of her academic leadership, her long contributions as a Director of IISL and as the Chair of its Publications Committee, and to the organisation of the Eilene M. Galloway Symposium on Critical Issues in Space Law, and her contributions in national and international bodies such as UN COPUOS.

(b) Dr Irmgard Marboe and Prof Sa’id Mosteshar are honoured with the 2016 IISL Distinguished Service Award. Prof Sa’id Mosteshar’s award is given away in recognition of his outstanding services for over three decades to the fields of telecommunications and outer space law across the transatlantic space community and beyond, his academic leadership and his long-standing role to support his national delegation to the UN COPUOS. Dr Irmgard Marboe’s award is in recognition of her rare scholarship, her significant contributions as the chairperson of the Working Group on National Legislation in the Legal Subcommittee of the UN COPUOS, her active contributions to IISL Colloquia over the years and her notable role in the elaboration and adoption of the Austrian Outer Space Act.

(c) Yvon Henri/Attila Matas, ITU are jointly being recognised by 2016 IISL Award of Appreciation in recognition of their longstanding and dedicated contributions to the international space and telecommunications community and for their notable role in the Radiocommunication Bureau of the International Telecommunication Union (ITU) in effectively managing the procedures for registration of all space system frequency assignments and also providing assistance and support to administrations, operators and frequency assignment customers on all issues related to space service frequency management.

(d) Indian Space Research Organisation and the National Law School of India University, Bangalore are being awarded the 2016 IISL Certificate of Gratitude in recognition of their nurturing an exemplary spirit of international cooperation in promoting the capacity for space law among the young generation in the Asia Pacific Region, their longstanding support to the organisation of the Manfred Lachs Space Law Moot Court Competition since a decade and for their valuable contributions in organising the 2016 Asia Pacific Regional Round.

The Committee greatly appreciates services of Dr Leslie Tennen for his help with the logistics of the Awards. 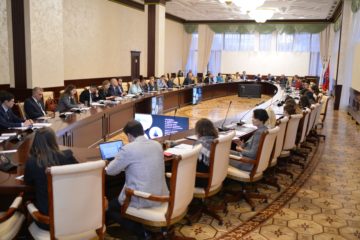 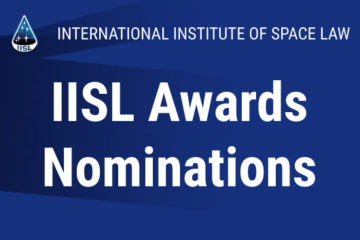 [MEMBERS ONLY] The IISL is now accepting nominations for the 2021 #IISLAwards.  Each year, IISL recognizes eminent and extraordinary contributions and services to the field of space law, and the advancing of broader objectives of Read more…

Virtual meeting of the Board of Directors

In its very first virtual meeting on 22 March 2020, the IISL Board of Directors (BoD) sent a signal of capacity to act in times of the COVID-19 crisis. The BoD had planned to meet Read more…